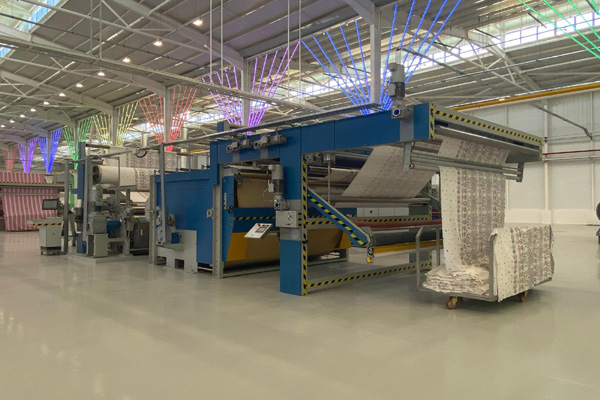 Around 80% of Turkmenistan’s production of textiles and garments is currently exported, with a value of $350 million in 2020. This is now expected to rise to $450 million by 2023.

In addition to expanding in cotton yarns and fabrics, the country is also looking to enter other textile markets, including nonwovens, carpets and absorbent hygiene products, and negotiations are currently underway between the Turkmenistan Ministry of Textile Industry and the Korean Institute of Industrial Technologies to also commence manufacturing synthetic fibres from polymers.

In 2021, a new textile complex was opened by state-owned textile manufacturer Cotam in the city of Kaka, which is aiming to produce 3,650 tons of yarn, 12 million square metres of different types of fabrics and 1.2 million tons of finished products annually, with the creation of 1,300 new jobs.

Cotam now has two separate manufacturing sites at Babadayhan and Kaka, both of which have now been equipped with Monforts technologies built at the company’s plant in St Stefan in Austria. They have been erected and commissioned to the full satisfaction of the customer by Monforts’ regional representative Neotek.

Cotam supplies finished fabrics to both the apparel and home textiles markets and at its Babadayhan plant is now operating two Montex stenter lines and a Monfortex sanforizing line. At its new Kaka plant, the company has also installed two Montex stenter lines, as well as a Thermex universal hotflue for continuous dyeing and curing.

“Turkmenistan celebrated 30 years of independence in 2021 and has made a giant leap forward in its progressive development,” said Monforts Managing Director Stefan Flöth. “A textile industry equipped with modern high-tech equipment has been created factories and equipped with the most advanced and high-performance equipment built and put into operation. We are extremely pleased that the Ministry of the Textile Industry of Turkmenistan chose Monforts machinery for its new textile complex in Kaka and together with the machines for Babadayhan and other recent projects we are proud to say that 15 Monforts machines are now established in the country.”

Monforts will take part in a VDMA textile technology trade delegation to Turkmenistan from November 21-26, on behalf of the German Federal Ministry of Economics.