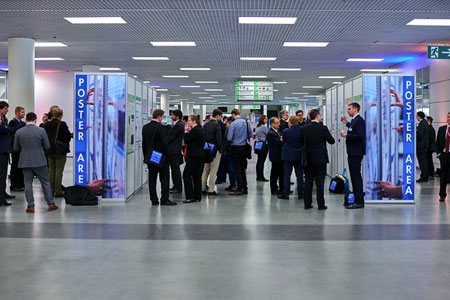 This year’s Filtech conference and exhibition, held in Cologne from March 13-15, was bigger than ever before, and for Monforts is now becoming a regular event on the exhibitions calendar.

“We already have some very good references for our finishing and coating ranges with filter media manufacturers and we were very happy with the many potential discussions we had with new and existing customers over the three days,” said Head of Technical Textiles, Jürgen Hanel. “The fact that this year’s Filtech attracted so many big names for the first time – and that next year the show will be extended to two halls – speaks volumes about the successful organisation, the popularity of Cologne as the location and the continued growth of the filtration industry.”

In a keynote address at the event, Dr Christine Sun, Chair of the American Filtration Society, said that the global filtration industry now has an annual value of over US$80 billion.
Nonwovens currently account for around 37% of the filter media market by volume, according to the AFS projections, while membranes – employed for finer filtration that cannot be achieved by conventional fabrics – account for 23%. However, given that they are generally employed as separation layers and reinforcement for membranes, nonwovens can be considered to be employed across the entire filtration spectrum. There is also a considerable market for woven fabrics as filter media.

“We have experience of handling a wide range of fabrics for the filtration sector and there is a diverse range of needs when it comes to adding functionality through finishing, whether for filtering air, water or oil – and especially in the automotive and industrial markets,” said Jürgen Hanel.

Suzanne Abetz, of show organizer Filtech Exhibitions, confirmed that with 14,000 participants compared to 12,000 in 2016, this year’s Filtech was the biggest ever and the show attracted no less than 140 new exhibitor companies, to bring the total exhibitors to over 380.
Running in parallel, the Filtech conference, which has always been comprehensive, presented 180 lectures from industry representatives and research scientists from 30 countries.