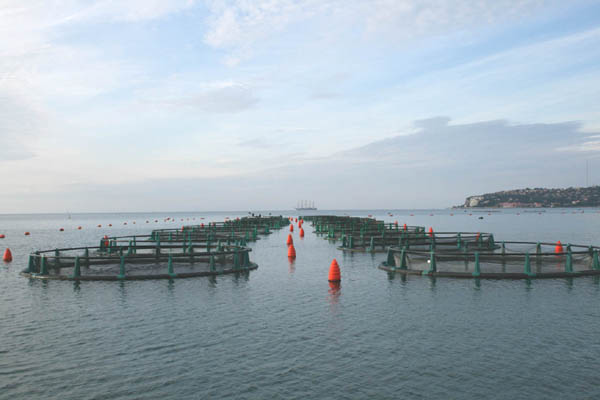 Monforts has recently been involved in a number of R&D trials aimed at improving the performance of the fishing cage nets employed in fish farming operations at its Advanced Technology Centre (ATC) in Mönchengladbach, Germany.

The cultivation of both freshwater and saltwater fish populations under controlled conditions is a global industry valued at around $200 billion annually and only made possible with the use of huge aquaculture nets.

“These nets are very prone to biofouling and to avoid its negative impacts, high-pressure robotic jets are now used to clean them,” explains Monforts Head of Technical Textiles Jürgen Hanel. “Net cleaning is expensive and can also damage current antifouling coatings on the nets, causing contamination as well as fish health and welfare risks.

“The abrasion resistance of the nets is also extremely important, because in addition to the general wear and tear of the underwater environment, they also contain a lot of potential food for predatory bigger fish, such as sharks. Even sea lions have been known to be attracted to these fish farming cages, but have the advantage of being able to jump over the top of them if they’re not sufficiently protected.”

The development of more effective antifouling coatings for fishing cage nets has been one aspect of R&D work at the Monforts ATC, while the use of how alternative fibres could potentially be coated or finished to replace the polyamide which is currently most widely used has also been explored.

The issue of plastics and synthetic fibres in the oceans has generated global media attention recently, and the aquaculture industry is exploring all avenues that will lead to more sustainable practices.

“We are asked to investigate a wide range of fabric finishes and coatings at the ATC, where our customers can test their own textiles and technical fabrics on Monforts dyeing, finishing and coating machines under fully confidential, real production conditions,” says Jürgen Hanel.

“The range of textiles finished or coated with Monforts technologies is already extremely diverse, including standard knits and wovens, as well as advanced denim. When it comes to technical textiles, our lines are already being used commercially for treating substrates for digitally-printed soft signage, carbon fabrics for composites, filter media which must perform in extreme temperatures and flame retardant barrier fabrics, to name just four applications, but the list gets longer all the time.”

Since its opening in 2013, over €3 million has been invested in equipment at the Monforts ATC, which over an area of 1,200 square metres houses two full finishing lines, engineered to accommodate an extremely diverse range of processes, in addition to a Thermex range for the continuous dyeing of denim.

Recent expansions have included the installation of the latest Monforts texCoat coating system, with its multi-head capability, and the CYD yarn dyeing system for denim, both of which received an enthusiastic reception at last year’s ITMA show in Barcelona.

“We have subsequently demonstrated the potential of these new technologies to many customers during their visits to the ATC, in addition to running full trial programmes on our industrial-scale machines,” Jürgen Hanel concludes. “The intended end-uses may not always be as unusual as fishing cage nets, but whatever the application, trials in real production conditions yield the results that enable us to make many recommendations for improving fabric finishes and coatings.”