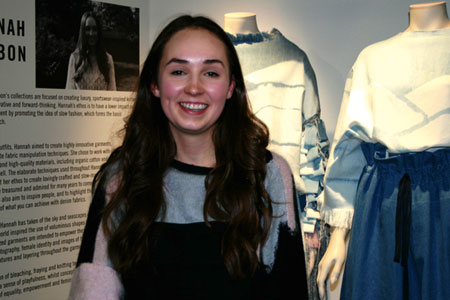 A number of key Monforts customers have recently provided fully-finished fabrics to avant-garde designers for a special denim collection.

Advance Denim of China, Kassim, of Turkey, and Spain’s Textil Santanderina all supplied fabrics for the UK designer Hannah Brabon, whose collections are focused on luxury, sportswear-inspired knitwear.

“For my two outfits I aimed to create highly innovative garments using intricate fabric manipulation techniques,” she said. “I chose to work with high-quality materials, including organic cotton and Lyocell. The elaborate techniques employed reflect the ethos of creating lovingly crafted and slow-made fashion. A combination of bleaching, fraying and knitting techniques were used.”

Swiss designer Eliane Heutschi of the Savoer-fer womenswear brand worked with Japan’s Toray International and applied the pleating technique that is normally used with light and feminine fabrics to denim.

“I was inspired by this contrast with the thickness of original denim workwear materials,” she said. “Pleats in themselves are a contradiction, giving form to fabric but hiding body shapes when applied to garments.”

Her jacket and pants were the result of playing with the lines of a denim jacket/pant suit – the normal part of the suit is made from closed flat pleats with the fused part having more open pleats that fall with the volume until becoming horizontal.

“This creates a distortion – a form of elongation that continues to open and close in on itself,” Eliane said.

The cut of the Savoer-fer dress, meanwhile, is light and open but its fabric is dense and it floats around the body without constraining or constricting it

Elanore Guthries’ Knorts brand, based in Los Angeles, is also known for handmade denim knitwear made with the finest indigo, but discovered new possibilities through collaborations with India’s Artistic Milliners and Kassim Denim

“Knitwear allows Knorts to create any texture and silhouette imaginable, so I appreciated the fact that machine-woven jacquard denim can offer similar capabilities,” Elanore said. “The designs are inherently complimentary and reminiscent of our design process and knitted denim aesthetic.”

Denim from Artistic Milliners was employed in the Knorts athleisure outfit on display, and that from Kassim in an outfit comprising fisherman’s wading pants and a matching cropped, button-up shirt.

Afterhomework’s designs are usually made entirely in small Paris ateliers – as showcased at the Denim Pop Up Street – but the Paris brand worked with the machine-manufactured denims of Brazil’s Vichuna in designing silhouettes inspired by the code of workwear – from centuries past to modern times, and from big peasant skirts to craftsmen’s aprons.

Finally, while there was a notable move away from the elaborate laser designs and rips and frays of previous shows at the Paris show, in favour of simpler, classic design elements, Marion Gauban Cammas and Ulysse Meridjen of Proêms de Paris opted to go to the other extreme with fabrics from Calik Denim of Turkey and pakistan’s US Denim Mills.

Their work, the designers explain, is often inspired by literature.

“We played with fire for our first silhouette,” they explain. “We were working on the concept of dystopia for our previous collection and this idea was directly inspired by Ray Bradbury’s novel Farenheit 451. We wanted to torture the material, push it to its limits, deteriorate it while retaining its allure and feel. Denim is a very robust material and it was interesting to find the balance between sublimation and destruction.”

The Avant-Garde collection was exhibited at the recent Denim PV in Paris, and also in the stores of the Denim Pop Up Street held each evening after the show, on Rue du Vertbois in the city’s Marais neighbourhood.