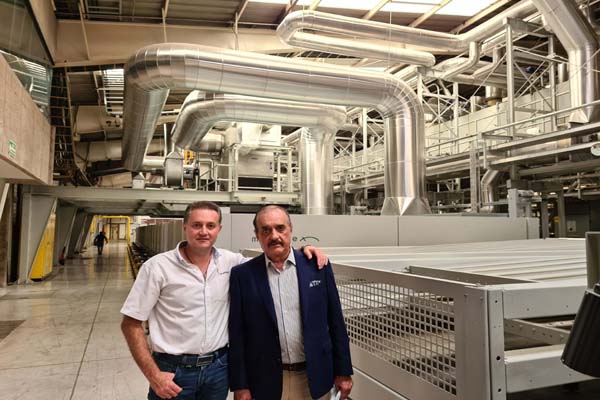 At a total length of over 71 metres, the Montex finishing line that has just been installed by Monforts for Acafintex at its plant in Puebla, Mexico, is one of the highest capacitystenters the German technology leader has delivered to date.

Puebla is known as the epicentre of Mexico’s textile and clothing industry and is ideally placed for supplying both the USA and Europe, being three hours from the Gulf of Mexico for shipping via the Atlantic, and five hours from the Pacific coast as well.

Mexico’s textile and clothing industry spans the entire production chain – from cotton growing and man-made fibre production to the manufacture of yarn, fabric, finished clothing and accessories. The industry is estimated to directly employ around 640,000 workers and to provide livelihoods for many more people indirectly. The country is a key supplier of textiles and clothing to the USA, but has faced fierce competition from China, which has until recently been the largest supplier of textiles and clothing to the US market.

However, the position of Mexico in the US import market has become more stable following the signing of the United States-Mexico-Canada Agreement (USMCA), which came into force in July this year. The country has also been a key beneficiary of the current trade war that is raging between China and the USA.

In addition, there is scope for higher sales in Mexico’s domestic market. The country has a population of 129 million people who are becoming increasingly prosperous, with a large proportion of younger people who are spending more on clothing.

Founded in 1986, family-owned Acafintex operates as a commission dyehouse, finishing both knitted and woven fabrics for local companies in Mexico, in widths of between 100cm to 3.6 metres. The company is run by father and son team Don Francisco and Lic Francisco Moyano.

“We have very flexible operations for fabric finishing and also produce and sell our own fabrics for both the fashion industry and for the uniforms market,” says Don Francisco. “These days, we are increasingly finishing materials for technical textiles and for the automotive industry too. We have both local and international suppliers of both yarns and base fabrics and make sure we choose the best and most reliable sources. Exports now account for over 40% of our sales.

With a  width of 3.8 metres, the new Monforts Montex line at Acafintex is equipped with no less than 12 double TwinAir drying chambers to meet the requirements of specific technical textiles to a European customer, in a contract secured following the company’s ISO 9001 certification in 2019. The line is equipped with an integrated heat recovery system and also benefits from an exhaust air cleaning system to ensure the most resource-efficient processing available on the market.

On the Monforts TwinAir system, the airflows above and below the fabric being dried can be regulated completely independently of each other, with Optiscan Auto-Balance fully controlling the distance between the fabric and the dryer nozzles via variable-frequency fan motors and CCD chip evaluation. As a result, the evaporation rate of the stenter and its energy utilisation are always fully optimised. Contact-free drying eliminates the possibility of fabric marking or stitch draft.

Highly-intuitive Monforts Qualitex visualisation software allows all machine functions and process parameters to be assessed and controlled easily, and thousands of article specific settings and formulations to be called up at any time – with 100% reproducible results.

In combination with an existing Montex stenter, the new line has expanded finishing capacity at Acafintex to an annual 20 million linear metres.

“From the installation to the start-up, we were supported by a team of Monforts technicians and local representative Arnulf Thaler at Sattex here in Mexico,” says Lic Francisco. “Of course, every installation has its challenges and with such big machines we needed to modify several things inside the factory and also required certain modifications from Monforts which were all carried out successfully.”

Forced, like much of the textile industry globally, to temporarily suspend operations at the height of the Covid-19 pandemic, Acafintex is now back to full production, having installed the necessary safety measures for its employees, and is anticipating a bright future.

“We are passionate about developing new materials in search of mutual benefit for both our clients and suppliers, as well as our own workforce and the environment,” Don Francisco Moyano concludes. “Investment in the latest technology like this new Monforts line plays a key role in helping us achieve our long-term goals.”